MOTIV software is a semi-analytical model developed for the prediction of ground vibration generated by surface and underground trains and its variation made by different track structures or vehicle types.

An important environmental impact of existing and future railway lines occurs due to the ground-borne vibration induced by the trains; this is an issue both for trains running on surface railways and for trains in tunnels. Ground-borne vibration from railways is generated at the wheel-rail interface due to the passage of individual wheel loads along the track (quasi-static loading) and due to dynamic interaction forces caused by irregularities of the wheels and tracks (dynamic loading). The vibration generated propagates through the ground to nearby buildings where it may cause annoyance to people or malfunctioning of sensitive equipment. Inhabitants of the buildings perceive the vibration either directly, due to motion of floors and walls in the frequency range 1-80 Hz, or indirectly as re-radiated noise in the frequency range 20-250 Hz.

Railway projects often need to predict the vibration levels at the ground and the change made by different track structures or vehicle types on the spectrum of transmitted vibration. Modelling ground-borne vibration from railways is essential for predicting unacceptable levels of vibration and also understanding the physics of its generation and propagation. A good understanding of the problem is key to identifying ways to tackle unacceptable levels of vibration from existing as well as future railway lines.

MOTIV software is a semi-analytical model developed for the prediction of ground vibration generated by surface and underground trains and its variation made by different track structures or vehicle types. This page provides a brief reference information about the MOTIV software, its user interface and functionality. 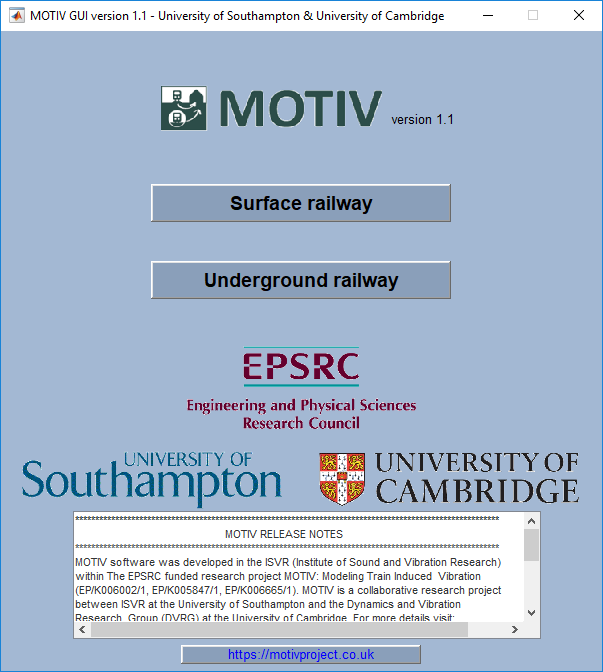 MOTIV software is a powerful semi-analytical computational tool for calculating vibration from surface and underground railways and for assessing the performance of vibration countermeasures at the track and/or the train vehicles. The software has a user-friendly graphical interface and it uses state-of-the-art techniques to perform quick predictions of vibration levels at the track vicinity and at the ground far field. In both surface and underground cases the track/tunnel is modelled as an infinitely long structure where the ground is modelled as a linear, layered and infinite soil medium. For surface railways, the software employs a model of a (ballasted, slab or floating slab) track that is longitudinally invariant and vertically coupled to the surface of the ground. No coupling is made to the lateral shear stress at the soil surface. For underground railways, the software employs a model of an invariant (ballasted, slab or floating slab) track coupled to a circular tunnel embedded in the ground. The effect of a second (twin) tunnel can be included in the vibration prediction procedure. The software calculates the root mean square (RMS) vibration level of the vertical velocity at any selected point in the soil. Excitation is assumed to be due to the passage of individual wheel loads along the track (quasi-static loading) and due to dynamic interaction forces caused by irregularities of the wheels and tracks (dynamic loading). The RMS vibration level is calculated for any given axle loads and wheel/rail irregularity profile.

All grounds are stratified on some scale and this layered structure of the ground has important effects on the propagation of surface vibration in the frequency range of interest. Typically, grounds have a layer of softer weathered material that is only about 1 to 5 metres deep on top of stiffer soil layers or bedrock depending on the geology of each site. In the field of railway ground-borne vibration, the soil is most often modelled by assuming linear elastic constitutive behaviour. This arises from the fact that during the passage of a train, the strain levels in the soil remain relatively low apart from a small zone close to the track.

In MOTIV software the ground is modelled as a linear, layered and infinite soil medium. This representation is often called as elastic layered half-space. The parameters used for defining each layer of the ground are the thickness of the layer, the material density, the material stiffness that is most commonly defined with respect to the dilatational (P-wave) speed and shear (S-wave) speed, and the damping loss factor. These properties can be either assumed from engineering experience or derived from experimental testing at the specific site under investigation.

In MOTIV software the track is located at the surface of the elastic layered half-space model that represents ground, or on the top of the tunnel invert when underground railways are studied.

The track componets in MOTIV available trackforms are modelled as:

For ground-borne vibration, where the frequency range of interest is usually between 1 and 250 Hz, the train is modelled as a linear multiple rigid-body system. In practice, due to the vehicle suspension, at frequencies above about 10 Hz usually only the unsprung mass of the wheelsets is important. Consequently, it is acceptable to neglect flexible modes of the car body. In MOTIV software, only vertical interaction forces are considered and only the vertical dynamics of the sprung masses of the train are included. Additionally, non-symmetric loading at the wheel/rail contact points occurs only at relatively short wavelengths (high frequencies; usually above 10 Hz). Thus, due to the presence of the suspension, the rolling modes of the car body and the bogie are not excited. Similarly, each wheel has only vertical displacement.

The coupling between vehicles is neglected and to enable analysis in the frequency domain each non-linear suspension is linearized, which is valid for small motion amplitudes. Additionally, hysteretic, viscous or viscoelastic damping can be introduced and included in the stiffness elements of the vehicle suspension.

Regarding the train-track contact dynamics, it is assumed that the wheel is always in contact with the rail. A linearized Hertzian contact spring is included between each wheel and the rail, although for the frequency range of ground-borne vibration, inclusion of the contact spring does not influence the total response significantly.

MOTIV software can calculate the ground vibration level due to an underground railway for a tunnel buried in an elastic layered half-space model. In MOTIV software the tunnel is modelled using the thin shell theory. In an intermediate step, the assumption that the tunnel is located in a full-space is used for the calculation of the tunnel-soil interaction forces that is acceptable when the distance between the tunnel and the free surface or the layer interface larger than twice the tunnel diameter. The effect of a second (twin) tunnel can be included in the vibration prediction procedure.

MOTIV software was developed in MATLAB and is compatible with version R2017a and later ones. It requires either MATLAB desktop (R2017a or later versions) to run within MATLAB enviroment (pcode version) or  MATLAB Compiler Runtime (MCR) on the deployment machine to run binary files (executable version). For better computational times a modern computer is recommended with at least 4 GB of RAM. A MOTIV software version that enables parallel computing procedures is also available.

Prediction of ground vibration level at the far field 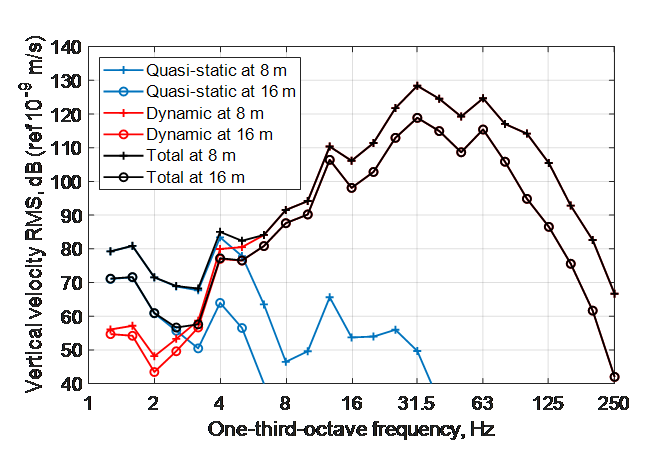 Prediction of vibration level difference due to different track forms

MOTIV software can calculate the ground vibration level difference for different track forms and any point at the ground.

Prediction of vibration level difference due to different track components 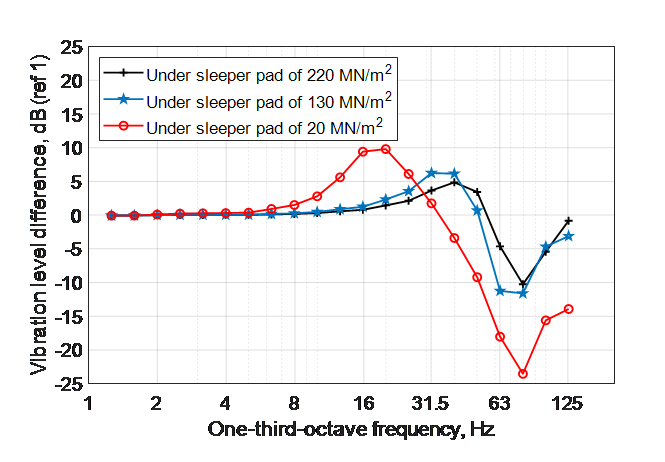 MOTIV software can calculate the ground vibration level difference for different track components and any point at the ground.

MOTIV software can calculate the ground vibration level difference for changes of the vehicle parameters.

Prediction of vibration level difference due to different soil conditions

Prediction of rail deflection due to different track forms